From 2016 through 2019, the hatch I.T. team has screened and interviewed over 1300 software engineers in the DC, Maryland, Virginia (DMV) area. We compiled the data from these conversations into the 2020 DMV Software Engineering Compensation Report.

This report reveals insights on:

The data supports trends our team has seen in the region. Here are some takeaways from the report.

The average salary for a Software Engineer in the DMV area is $131,000.

Of the 30 role categories that were in our data, only Systems Engineers, Test/QA Engineers, and Support Engineers averaged less than $100,000 in salary.

Here are some interesting comparisons from the data:

Positions that are trending up in salary

Between 2016-2019, these positions saw a sharp rise in their average salary:

Data Scientists, Data Engineers, and Mobile Developers were all within the top 15 highest-paid roles in the DMV area for software engineering.

While Frontend Engineers were not in the top 15 highest-paid roles, they still saw a significant rise in average salary. Plus, as we’ll see int the next section, frontend skills are among the highest valued in the D.C. area.

Big Data has been growing in the DC area. There are numerous Meetup groups in the region focused on data, and even an entire online community in Data Community DC. 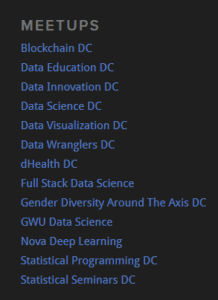 The need for Data Scientists and Data Engineers has been supported by the strong educational program near the Metro area. Most major D.C., Maryland, and Virginia universities offer post-graduate programs for Data Science, Data Engineering, and Data Analysis.

Engineers with a data science, machine learning, or A.I. background had an average salary of $136,136, while Data Engineers and ETLs averaged $128,750.

The rise of mobile development can be seen in just how many app development firms have opened in the D.C. metro area.

Washington D.C. is a government dominated market. Making applications and interfaces mobile-friendly has not been an urgent concern for agencies and contractors in the area. However, the rise of product startups in the DMV area, combined with the evolution of mobile-first consumer behavior is making companies prioritize this skillset in a limited talent pool.

The strong competition for Frontend Developers in the D.C area has driven up the salary for these positions.

A simple search for Frontend Engineer in Washington D.C. will show there are hundreds of companies looking to fill this role. We expect this competition to increase as more companies, like Amazon, move into the area.

Companies looking to stay competitive in the talent pool might have to open their search to engineers with non-traditional backgrounds and focus on benefits beyond salary.

Engineers in leadership roles have also seen a sharp increase in average salary from 2016 to 2019.

Management and leadership positions (from CTO to Principal Engineers) made up 8 of the top 10 highest paying roles in the D.C. area.

Engineers can move into these leadership roles, but they must be prepared to adapt to a different set of skills and responsibilities.

Skillsets that are trending.

We broke the data into keywords to find the average salary of local engineers by skillset.

As we mentioned in the last section, Frontend Engineering skillsets are amongst the most valued in the D.C. area. Of the 12 highest paying skills by keyword, 1/3 of them were related to frontend engineering (Angular, Javascript, Node.js, and React).

The value of a 4-year degree

In the DC area, engineers who have a 4-year degree make 10% more on average than their peers without a degree.

While a degree may lead to a higher salary, it’s not a requirement for many positions.

In our conversations with CTOs at local startups, we’ve found that startups are less frequently requiring a degree. In fact, some CTOs themselves do not have a 4-year degree. The emergence of coding academies, like Flatiron School and General Assembly, and leadership teams with different backgrounds are making employment more accessible for software engineers without degrees in the metro area.

Lots of newsletters tell you what startups are building, or how they’re funding it.

We interview founders and technical leaders about how they’re building it.

Our promise to you: no spam, no ads, just local events, interviews, jobs, and personal projects, from local startups and local developers.